Host/Augment Challenge: Make a pair of cards that meld into one card/ All three cards must be different colors.

Let us know what you think about the upcoming products!
Posted by Adam Victor Klesh at 9:00:00 AM No comments:

So I didn't make it make past Trial Three.  Now that I know, I am allowed to share the designs I submitted to Wizards, for better or worse.

Please tear these apart; I, like many others, learn best from criticism.

My first submission was a card I designed a long time ago.  It has mirrored abilities, and I think it's quite lovely. 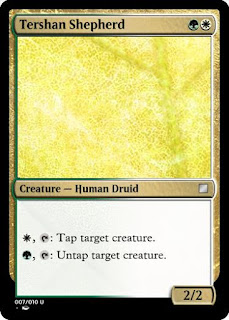 If you know my design style, I try to use elegance and simplicity.  I try not to use to many words to get the point across.  My second submission shows how powerful, simple spells can sometimes be all you need. It was originally designed as a Host/Augment challenge for the Beacon of Creation podcast, which I co-host. I changed it to not destroy lands because the original design was made with Commander in mind and not for Standard.  I wanted to make it a little more fair. 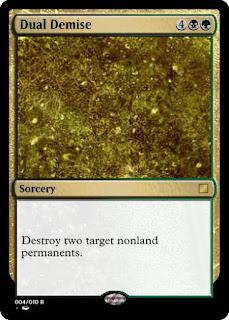 My third submission was a hole-filler.  After all was said and done, I needed a red/green enchantment and a blue/black instant.  I really wanted to show off snowfall, and this seemed like the best place to do it.  As I was following the rules of the submissions I wasn't use the ability word, but the rules text is the same.  This card has the most text out of any of my submissions, and I feel like it should probably be lower on the list, but here it is. 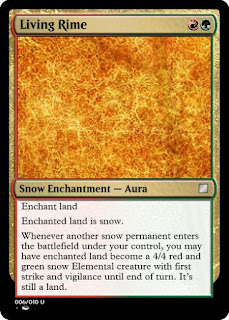 My fourth submission was another one of my podcast cards, but this time it was from a worldbuilding challenge. It was the perfect fit for a blue/white sorcery, but I after I submitted my final designs I noticed that my submission had it listed as common, when it should be at least uncommon.  Oh, well. 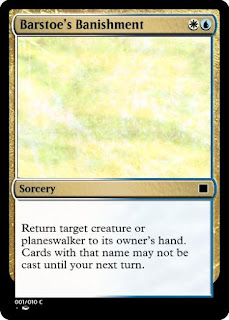 My fifth submission was the first of my two planeswalker designs.  I found these to be some of the most difficult designs, especially becasue they have so many knobs to fiddle with.  (In design terms, knobs are all the numbers that can be changed.)  Tibalt has more numbers than most planeswalkers, and I would say he was the most challenging to design. I wanted to get the flavor just right as well, and his being a torturer fit right in. If there was one thing I would change about Tibalt, it would be his first ability.  I would change it to life loss so less experienced players wouldn't get frustrated when they weren't able to redirect the backlash damage he deals to himself. 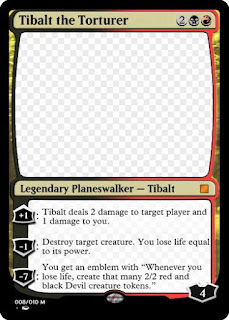 As I look back on my designs, I think that #6 should probably be higher on the list.  It just makes me smile. Remember noggles? From EVENTIDE?!  ANYONE!?!? Well, They were great. And here is one with Grandeur. 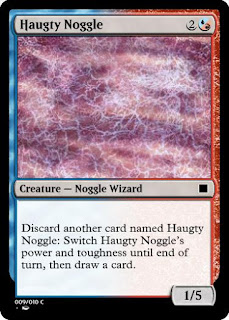 My seventh card was my second planeswalker.  He's fine.  I made him with a Phyrexian lean and a +1/+1 counter theme.  I like that you can ult him right away to draw a bunch of cards in the right deck. 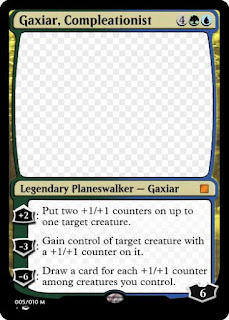 The eighth card was a combat trick!  A rare one, at that.  It's basically game over if you cast this for more than 5 mana with a few creatures attacking. 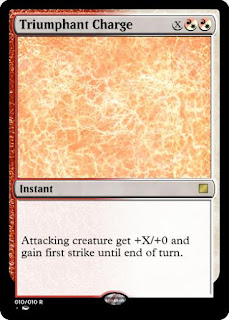 #9 was an enchantment that basically reflects how I feel when there are a bunch of people around. It's also pretty good removal in white/black. 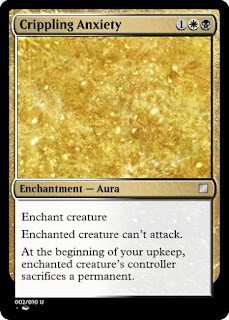 My final submission is my blue/black instant that I wasn't able to come up with for a long time.  It's a simple, powerful effect that would have modern players excited. 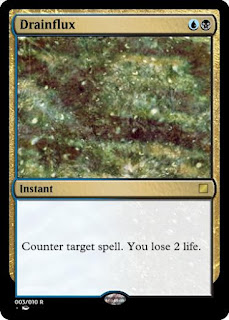 And that's it.  I'm serious, by the way, about being brutally honest with how well I pulled these off.  I want to be the best designer I can be, and padding the criticism is not necessary.

I am so glad that I had a chance to compete, and I will try again if given the chance.

Thanks for reading it all, and have a good one.

This week we had Zarepath on to talk about the difference between innovation and creativity.

Our host/augment challenge is to design a 4-color charm that has only two modes.

Our worldbuilding challenge is to design the artifact Dack is coming to the plane for.  It must be tied flavorfully to the world and its inhabitants.
Posted by Adam Victor Klesh at 9:00:00 AM No comments:

This week we had Jay Zeffren (@Zefferal) on to talk about self-imposed design restrictions.

Our Host/Augment challenge for this week is: The designed card must fit the following flavor text: “Those who laugh the loudest tend to laugh the shortest.”/ establish a mechanical hook that isn't directly related to the other keywords


Our worldbuilding challenge is just to come up with a name for the plane we have been working on, and the set name, if it's different.

I know it's been over two weeks since the last episode, but the episode that we recorded last Monday (the day before the results of trial 2 were released) and on Tuesday, I received word that I made it to the next round. I wasn't able to edit the podcast in time to get it released on Friday, but I finished my third design challenge and finished edited the extra-long episode minuted before it was released.

Thanks for your patience, everyone.

Now that that is out of the way, let's get into what this episode is about. Our guest is Michelle Rapp, a game lore expert, cohost of the Loregoyfs podcast, and many other things. We talk a lot about trial 2 of GDS3, which was the 75 question multiple choice test, and deep dive into the noir spooky mansion set we are building.

World Design challenge this week:  Design a ghost who "lives" in the mansion, and is the one that Tacatta is investigating.

Enjoy the episode, and send us an email at beaconcreation@gmail.com with your designs and follow us on twitter @magicdesigncast to say hi and give feedback.
Posted by Adam Victor Klesh at 11:17:00 AM No comments: