Card of the Day - Elven Architecture 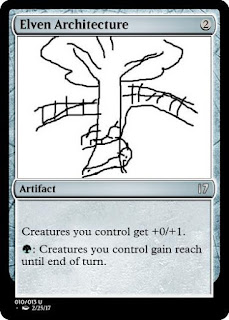 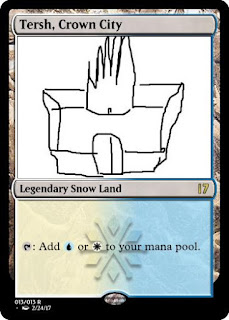 Making duals legendary is a reasonable drawback.  This one has the added bonus of being snow, making it a pseudo-triland.

Card of the Day - Obliteration Blast 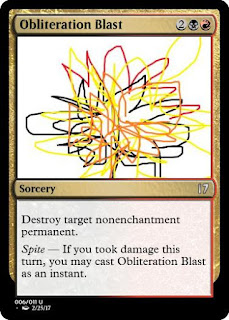 Are these effects in the right order?  Does the spite ability need to be first?
Posted by Adam Victor Klesh at 7:00:00 PM No comments:

Card of the Day - Eternal Unrest 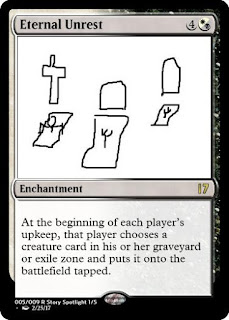 It's been a while since I did any real work on Frostmere, but now that Saturdays are full of flavor, I thought I would show off the Story Spotlight cards from that set.  Here is the beginning of the story of Frostmere:

In the secluded, frozen, peaceful plane of Frostmere, something has gone wrong. Those who have passed on just won't stay dead. Two days ago, the shambling forms of the previously living started coming home. They aren't bloodthirsty, but they are confused and easily angered. The dead who no longer have bodies wander through the streets of Tersh, the Crown City. Their wails are heard throughout the night, longing for the rest of their tortured souls.

King Micah looks out from his balcony, frowning. A day full of planning has left him weary. Half of the kingdom's soldiers needed to be deployed to Artoa, helping the people of the borderlands defend against the attacks of the wildlife. In such a small kingdom, half of the soldiers is only twenty men.

Suddenly, the King's advisor, Barlo speaks. He is standing in the doorway, hands folded.

Card of the Day - Druid's Respite 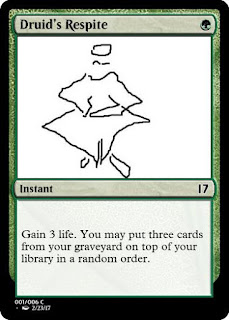 I was thinking about Espionage.  I was thinking about what green could do to protect itself against the mechanic in draft. This card is not very powerful, in general, but if you are about to lose from drawing a card, it can really save your bacon. I wanted the cards to be randomly ordered so you can't set up draws for three turns. It might change in playtesting, if it ever gets playtested.
Posted by Adam Victor Klesh at 7:00:00 PM No comments:

Email ThisBlogThis!Share to TwitterShare to FacebookShare to Pinterest
Labels: card of the day, Common, Green, Instant

Card of the Day - Disrupting Cube 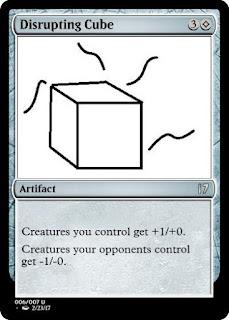 I started with this being a Blue/Red enchantment, but I realized that both of these effects are available at colorless.  I switched it colorless, but felt that a colorless enchantment is just weird, so I made it an artifact.

As I am writing this, I realize that this takes the best part of Mightstone and Weakstone and mixes them together elegantly.
Posted by Adam Victor Klesh at 7:00:00 PM No comments:

Email ThisBlogThis!Share to TwitterShare to FacebookShare to Pinterest
Labels: Artifact, card of the day, Colorless, Uncommon

Card of the Day - Rebel Provisionist 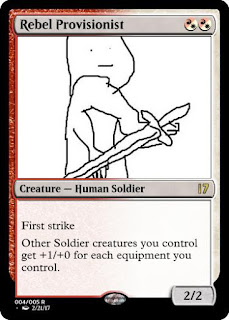 This card really goes in line with what red and white soldiers might want to do.

Card of the Day - Obelisk of Solidarity 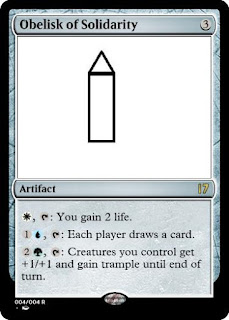 Tuesday Relic!  I will post an artifact or the like every Tuesday.  This one is inspired by the art of Amonkhet.
Posted by Adam Victor Klesh at 7:00:00 PM No comments: 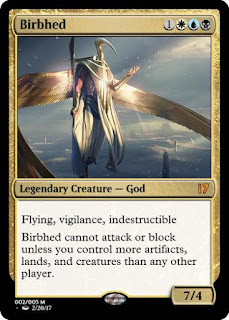 They showed some art from Amonkhet today on the Mothership, and here is my guess on the birdhead god.  I am hoping they make the five of them shard colors, but I have no reason to believe that they will.

Here is my baseless speculation:

Card of the Day - Eldritch Whispers 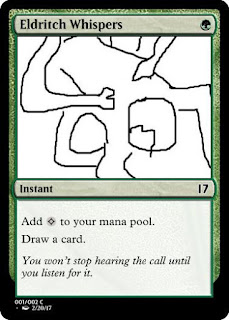 I'm going to be doing a few things differently on the blog.  I will be publishing one card per day, every day, for the rest of the year.  Each day of the week will have a theme. You can see the theme in the keywords.  Today's is Monday Mana.  Every Monday, I will make a card that produces mana.  I will be posting the blog at precisely 7pm Pacific time (yesterday was a fluke.)

Today's card is a colorless enabler.  I was toying with making it a 1G that gives CC, but I thought it enabled storm a bit too much in that iteration.
Posted by Adam Victor Klesh at 7:00:00 PM 1 comment:

Email ThisBlogThis!Share to TwitterShare to FacebookShare to Pinterest
Labels: card of the day, Common, Green, Instant

Card of the Day - Grand Entrance 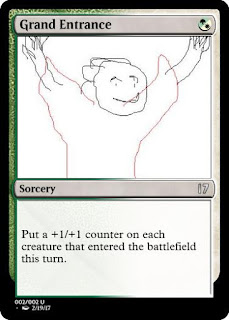 It's been a while since I've been posting cards, and for that I apologize.  Here is my re-entry into the world of custom card design.  Let's see where this goes.