Design Challenges due on Monday, May 28th:

Host/Augment Challenge:
A Vehicle that works better in multiplayer

Worldbuilding Challenge:
Cycle of five rare legendary creatures that came into Castmire via the plane’s extraplanar portals, they don’t have to be mechanically or “planarly” linked.


Challenges due on Monday, June 4th:

Host/Augment Challenge:
Two creatures that each have "partenr with" for the other/ they must both be colorless.


Worldbuilding Challenge:
"Style guide" for the plane.  Send pictures along with descriptions.

Here's a link to the most recent worldbuilding challenge, the Creature Grid. I've left some spaces open for anyone to add their own creature grids for Castmire. Please don't erase anything that other folks have put in here.  I trust you all to be professional.


Our guest, Jonathan Woodward, sent us an email to pass along this Two Headed Giant draft variant for four players:


"Here is my explanation of how to run a full two-headed giant draft with just four players.

A common problem I have encountered is that drafting with fewer than eight players can really skew the drafting experience.  If there are only four players present, having only 12 packs to pick cards from means that the decks assembled often look very little like the decks that would be built from a 24 pack draft.  These drafting issues get even worse if the format of choice is 2HG, as four players normally only represents two teams.  However, there is a solution to this issue that works very smoothly for drafting 2HG with just four players.

Our four players are A, B, C, and D.  For the drafting portion of the event, each of these players represents an entire 2HG team (you can pretend they have imaginary partners seated beside them who don't offer any input).  Each player begins with six packs (or four packs of Battlebond) in front of him or her, and drafts a pool of cards from which to build two 2HG decks, the same as in a regular four team 2HG draft.  After drafting, each of the four players builds two decks from the cards they drafted - again, the same as a regular 2HG draft.

When deck construction is complete, it is now time to play player A's decks against those of the player who drafted on the opposite side of the table from him, player C.  Player B joins player A, and together they each play one of the A decks in a 2HG game against players C and D playing C's decks.  Let's say that the A decks beat the C decks.

The next game will be players B and C playing B's decks against players A and D playing D's decks.  Let's say that the B decks win.

In the third and final round of our single-elimination tournament, players A and C will play A's decks against players B and D with B's decks.

I've found this structure to work quite well.  One of the fun features of this method is that everyone gets an opportunity to play on a team with everyone else."

See you next time!

So, to keep up the trend, I'm doing all the GDS3 challenges in the limited time frame available before the real results are out.  The rules for design challenge 2 are here.

Here are my circus cards: 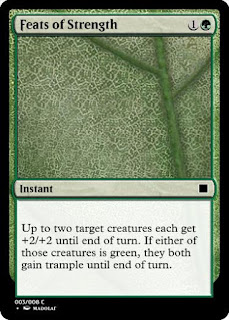 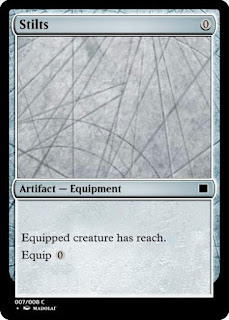 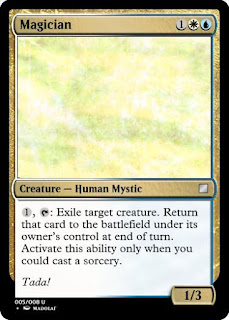 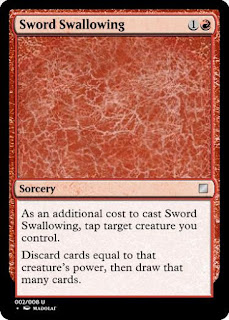 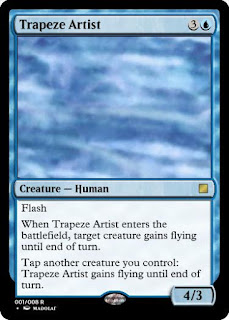 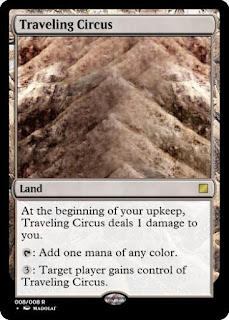 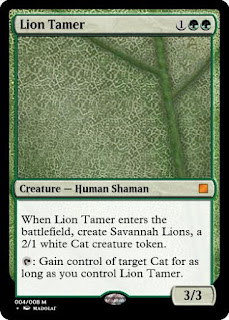 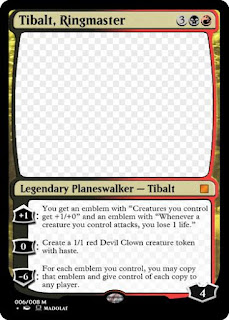 My mythics are a little weird, I know.

Lion Tamer seems a little out of color pie mechanically, but flavorfully, I believe it fits.  His control over the cats isn't magical as much as it is nature-oriented.  He befriends them instead of dominating their will. (He might actually be a Druid instead of a Shaman, now that I think about it.)

As for Tibalt, I think emblem manipulation is a fun mechanic that hasn't been explored yet.  There are some weird rules interactions that might need to be fudged, but I would say the ability is pretty grokkable.

Next week's design challenges are :


Suggestion from a listener below

Due Monday, May 28th by 7pm Pacific time:

A card that works better in multiplayer/ must be a vehicle.

Five Rare Legendary creature cycle (they don’t have to be mechanically or planarly linked), that came through one of the portals that Brad had imagined might be the case with Gates mattering for this day to day use of the mansion.

GDS3 Design Challenge 1: You Might as Well Tribal (for fun)

I haven't made it to the top 8, but I've decided to give this challenge a try.  The tribe I chose was Advisor. You can find the rules here. Here are my submissions: 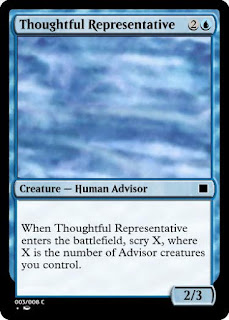 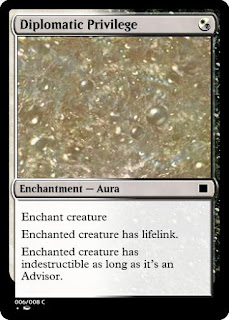 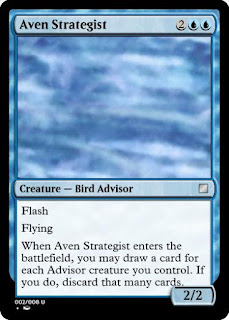 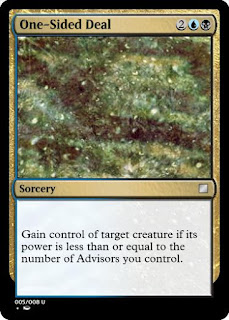 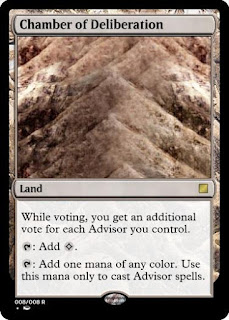 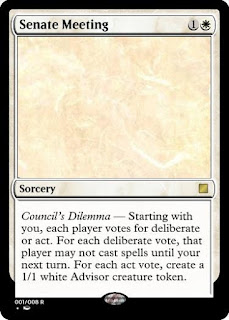 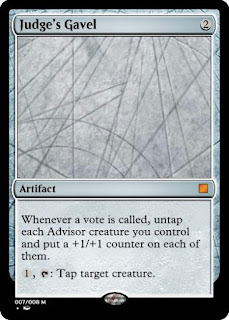 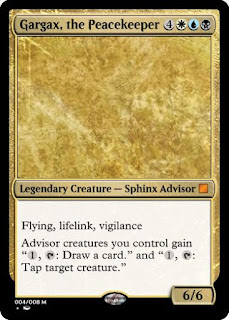 
The votes are in are for the mechanic we remove from Castmire, and it turns out that Shadow is being removed.

Host + Augment Challenge
Design a card that uses exert, but not on a creature

What is the climax or aftermath of the story, and how do the characters play into it.

the yet unnamed green planeswalker are the characters that are set up so far. If you are not familiar with the story basics, old episodes have some information.

Suggestion from a listener below

Welcome to the first round of voting for specifics in Castmire.  Since Brad and I want this to be a community project, we really need your feedback to make this the coolest set it can be.


The flavor of the green planeswalker is that of growth.  It is an ever-growing treefolk/plant/fungus/TBD that had grown too large for this plane and has recently sparked, sending offshoots to other planes. It believes nature's way is to have everything become a part of it.

Note: All submissions are listed alphabetically.

We have a few different names to choose fro

We all know that most planeswalkers have something after their name.  This is a list of the things that were provided.

Some versions don't list a + ability, so I will put the ability as written

1. +1: Create a 1/1 green Saproling creature token with “At the beginning of your upkeep, create a copy of this token.”

3. +1: You gain 2 life for each card you and target opponent own in exile. Untap up to one target creature you control

4. (triggered) When a land enters the battlefield under your control, put a loyalty counter on ~.

2. -1: Create a token copy of a land an opponent controls.

4. -2: Exile target creature until ~ leaves the battlefield. You gain life equal to its toughness.

The minus number on whatever one you choose isn't final, it's just what was given originally.  The number will most likely be changed in the final iteration.

1. -3: Put a +1/+1 counter on target creature and each other creature with the same name as that creature.

2.  -4: You get an emblem with “If an effect would create one or more tokens under your control, it creates twice that many of those tokens instead.”

4. -6: Return a card of each type from your graveyard to your hand.


Vote VI - What type of thing is this planeswalker?

1. Treefolk
2. Fungus
3. Plant
4. (something else) - Please include write in candidate.

Okay, I know this is a little complicated, but the best way for you give your answers is by sending us an email at beaconcreation@gmail.com or by commenting on this blog post.

Feel free to vote for any or all of the categories.  This planeswalker is an important part of our set and the story, and we want you all to be a part of its creation.

You are welcome to write in other options in the comments.  If you come up with something great, other folks might vote for it too!

Okay, that's it for the first vote.  May the best things win!

Just a reminder that next week's submissions are due by Monday, May 7 at 7pm Pacific time.

An uncommon sorcery with CMC 8 or greater / has to feature a creature type not seen in Magic before.

Worldbuilding: (This is a big one!)

1. Design a new mechanic replacing one of the current five in Castmire, and explain why.
2. Rank the five mechanics from 1(best) to 5 (worst). The lowest ranked mechanic will be ousted in favor of one of the new submissions.

Challeneges due on May 14th:

Design a card that uses exert, but not on a creature/ rules text must be exactly four sentences long.

What is the climax or aftermath of the story, and how do the characters play into it. Barstoe, Dack, Tacatta, Kaya, Ashioc(?), the yet unnamed green planeswalker are the characters that are set up so far.

Stay tuned for voting on the green planeswalker abilites.  That post will be coming soon.