Card of the Day - Shipwreck Coast 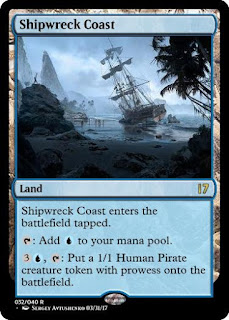 I don't often make cards from the art I see, but this one popped up /r/imaginarylandscapes and I was blown away.  The card itself is pretty strong, especially in a Pirate deck.  Or a Human deck, for that matter. Or a blue deck. Just any blue deck, probably.

Email ThisBlogThis!Share to TwitterShare to FacebookShare to Pinterest
Labels: Blue, card of the day, Land, Rare

Card of the Day - Jagged Prism 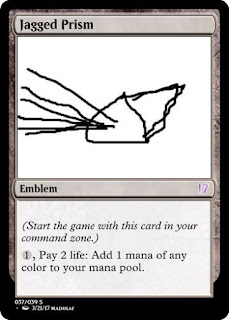 Okay so I missed a few days.  I've been really into this new format I've been developing. I call it SmashCube.

The rules are as follows:

Each player gets four (4) premade "packs", which they shuffle together and play a regular game of magic.  The packs can be picked in various ways, but I find that drafting is the most fun way to choose.

The packs have 15 cards, all of which are from the same set. Example: I have 22 of these packs completed, and another 100 or so in various stages of completion.

One thing I've noticed when playing a deck that can be anywhere for 1 to 5 colors is that mana fixing is necessary. When I first started the format, I made a rule that anyone can spend two generic mana to get one mana of any color.  This idea expanded into making an emblem with that ability on it.

After playing a few games with that emblem, I found that it was rarely used. I did, however, like having the option of using it.  The idea expanded into making several different emblems with various abilities.

Now when I play, before we pick our packs, we get a random emblem or two from the pile of emblems that we put into our command zones before the beginning of the game. This is a totally arbitrary rule, but I think it's fun to make up some emblems and play with them.

The ones I've made so far would cost about a mana and be very tiny effects that will usually be minorly helpful. I made a few that were too strong, and I've changed them since.


Let me know what you think.  I'm also accepting pitches for emblems.  If I like your emblem, I will credit you on the card.  Thanks!

Email ThisBlogThis!Share to TwitterShare to FacebookShare to Pinterest
Labels: card of the day, Emblem, SmashCube

Card of the Day - Grinning Pest 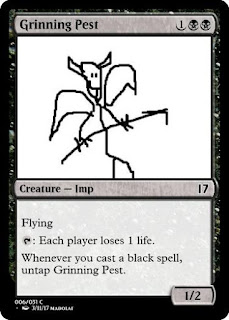 Annoying flier. I'm into it.

Card of the Day - Stand Ready 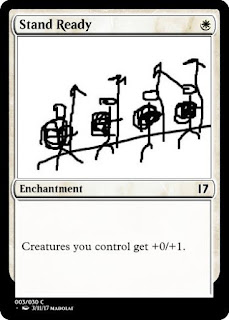 A simple effect.  There are a few cards that are similar, but more complicated.
Posted by Adam Victor Klesh at 7:00:00 PM No comments:

Card of the Day - Razorbrim Shaman 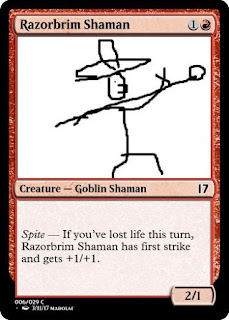 I'm not sure if I should use life loss or damage for spite, but I should probably stick to one.  Life loss is better, I think.
Posted by Adam Victor Klesh at 7:00:00 PM No comments:

Card of the Day - Spy Fly 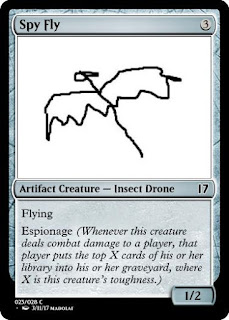 IF you're not familiar with espionage, check out the tag.  I've made quite a few cards with this ability.
Posted by Adam Victor Klesh at 7:00:00 PM No comments:

Card of the Day - Verdant Seashore 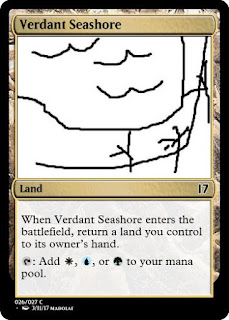 I was challenged to make more common cards.  Each card I make this week will be common.

Today's card is trying to solve the problem of fixing 3 color mana bases. The Ravnica block bouncelands do a very similar thing, as do the lairs from Planeshift.  I like to think of these as a more elegant version of the lairs.

Card of the Day - Mulch Spawn 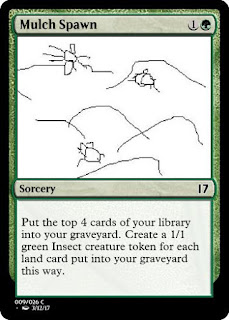 I like the idea that this can possibly make 4 1/1s for two mana, but will most often make 1 or 2. Design was inspired by both Crawling Sensation and Mulch.

Card of the Day - Marek's Keystone 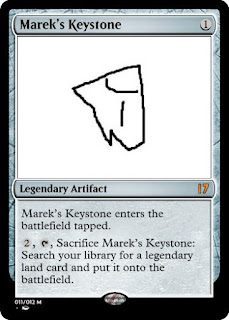 This is the relic that King Micah is sending with Otto to the Gargut Glacier.  I hope nothing bad happens...
Posted by Adam Victor Klesh at 7:00:00 PM No comments:

Card of the Day - Replace 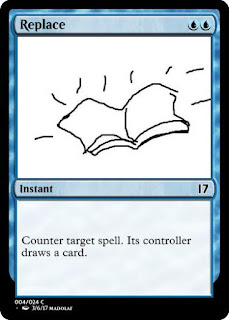 Card of the Day - Common Knowledge 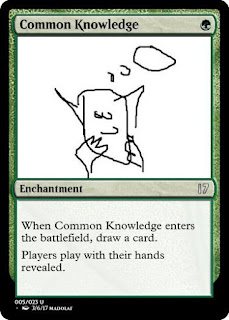 I was thinking about the card Telepathy today, and I was wondering why it didn't see more play. It's a powerful effect, especially against other blue mages.

I tweaked it to draw a card and reveal everyone's hands, but it didn't feel blue that way.

I thought about what other colors reveal hands, and couldn't come up with anything.

I thought about what color would want this the most, and came up with green. Green has an innate sense of the world that could be attributed to wisdom.

I made the card as it is and showed it to my wife.  She asked if there was any precedent for this sort of ability, and as I only remembered Telepathy, I decided to check Gatherer to see if any existed.

It took me a while, but I finally a found a card from a long time ago with the same cost and effect, minus the card draw. (Don't click the link until you guess!)

PS. Hollee is upset that this card is an Uncommon even though it's called Common Knowledge. Let me know what you think on the Facebook page, or tweet at me @madolaf.

Card of the Day - Vaporsprout 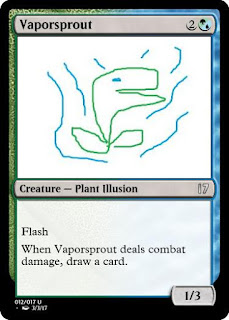 I thought of this one in the shower while pondering the nature of card draw and creatures.  Hystrodon and Thieving Magpie came to mind, and I thought "Why not make it hybrid?" Flash is a blue and green mechanic and lets the Vaporsprout replace itself right away, if necessary.

Card of the Day - Pinpoint Powderkeg 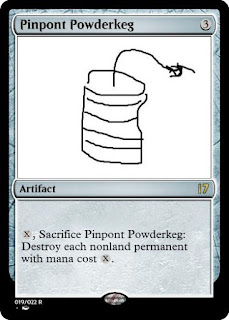 Card of the Day - City of Dreams 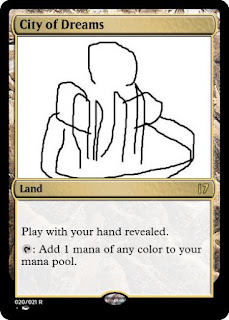 A land that taps for any color of mana needs to have a drawback.

Card of the Day - Guardian Spirits 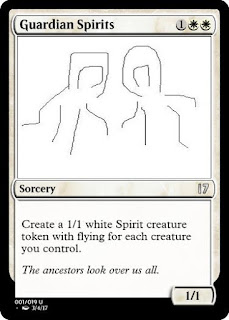 There were a few iterations on this theme. I wanted a card that made Spirits, but could potentially be more powerful than other token creators.  This spell will also definitely stop board stalls in limited. It's important to note that this card feels awful if you have no creatures, but the upside is very good. I suppose I could change it a bit to make it feel less bad with no other creatures. 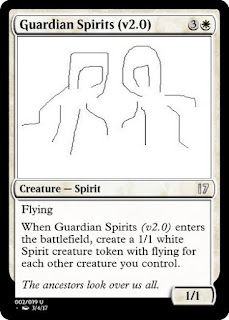 With this version, you get at least one creature, but it's much more powerful.  Should it cost 3WW, maybe?

Let me know what you think either on the comments here, or on the Facebook page here.

Card of the Day - Summoned to the Throne Room 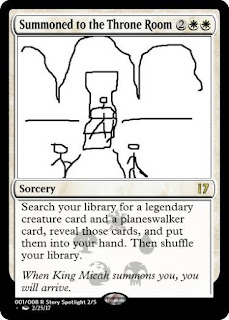 In the second Story Spotlight of Frostmere, King Micah summons his most powerful friends to the throne room.

The Planeswalker Otto and the city's champion Karos arrive at the castle...

When Otto arrives at the palace, Barlo Stanvik is waiting for him.

"I'm glad you could you come on such short notice," he says. "His Majesty will be so glad to see you after all this time."

"I'm afraid there won't be much time for that.  I assume you know what's going on in Tersh. It's..."

"Yeah, yeah.  It's terrible.  On the other hand, it could be a lot worse. At least the deadies aren't attacking people, though."

"ppft." The planeswalker waves away the suggestion, "Where's Micah?"

"In the throne room. Karos is already here."

"Karos, huh?  I wonder why Micah would need us both."

In the throne room, King Micah sits deep in thought.  He is staring at a small piece of parchment in his hands.

"My Lord, Otto is here." said Barlo from the doorway.

Micah looks up, frowning.  "Thank you for coming, dear friend. I assume you know Karos?"

A man with short black hair and a long scar on the right side of his face nods to Otto. "We've met."

"Good.  I need you two to do something for me." He holds up the parchment. "I've received... interesting news. A man claims that he can help us relieve the curse that has befallen us, but he insists that we come to him." He frowns.

"Well, why aren't we on the road already?" Otto folds his arms.

"It's not that simple. This man, Tibalt, says he needs an item from our treasury to complete the spell. A very special item. Not one that I would give to just anyone."

"Ah, I see." Karos speaks up. "That's why we are here. You need your best to guard the item on its journey."

"Precisely. Marek's Keystone could be very dangerous in the wrong hands. It's up to you to make sure it is kept safe. Your destination is the Gargut Glacier. You leave at first light."

"How do we know this guy isn't up to something nefarious?" Otto raised an eyebrow.

"If he is, you will stop him. Our kingdom won't last if the dead keep on coming back. We have no other choice."
Posted by Adam Victor Klesh at 7:00:00 PM No comments:

Card of the Day - Burst Card of the Day - Flayer Demon 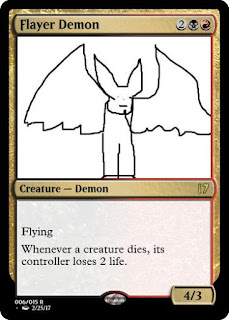 Card of the Day - Coldmire Dead 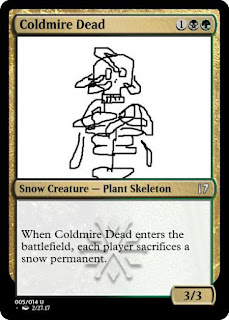 Skeleman.
Posted by Adam Victor Klesh at 7:00:00 PM No comments: