Card of the Day - Stoag the Poet 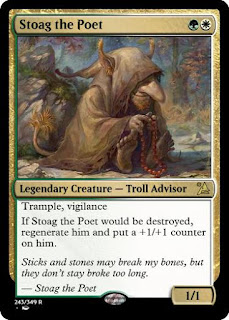 A few examples: Arcanis the Omnipotent, Ashling the Pilgrim, and Autumn Willow, and that's just the As.

I've noticed that the flip planeswalkers follow this trend as well, and I wonder if that's just because they are important characters, or if it's something they will be using on legendary creatures going forward.
Posted by Adam Victor Klesh at 9:47:00 PM