The Color Identity of Snow - Enchantments

In making Snow a theme for Frostmere, I had to give it something that nothing else has had before. After some fooling around with different mechanics, this is what I came up with: 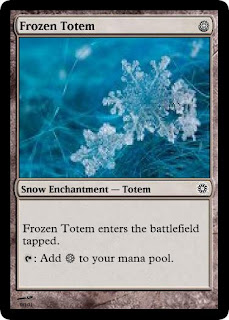 Notice the type line. Yes, it's true. Snow has enchantments that tap. Although Frozen Totem is not the first one to do so, (I'm talking to you Flowstone Embrace) it's the first time that tapping enchantments are a part of the flavor of the set.

A rule I set out for myself, as mentioned in last week's article, is that everything in this set that has the Snow type needs to have Snow in either its mana cost or ability costs. As I was designing Snow Artifacts, I noticed that there were an inordinate amount of them that had Snow mana costs. It felt unelegant to force Snow mana costs on artifacts without any activated abilites, so I tried switching the type of card. Snow enchantments have generally the same feel as artifacts, but are able to be targeted by a different subset of cards – Naturalize still works, but you can't Shatter a Frozen Totem. This seemingly innocuous side effect makes Snow better against Red, the color weakest against enchantments. Somehow, the cold winning against the inherent heat of the color red feels right in Frostmere. 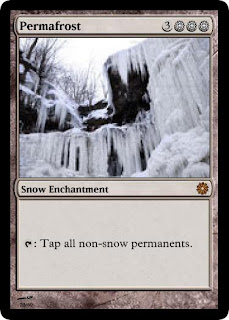 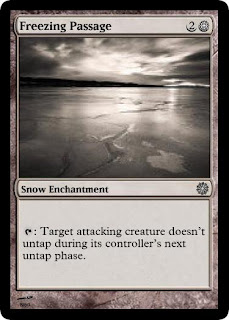 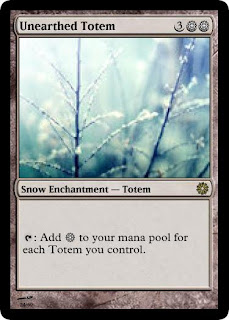 Let me know what you think, and next Friday we'll talk about lands, and maybe a Planeswalker (or two).