The Color Identity of Snow - Instants and Sorceries


First of all, let's look at what Snow has done in the past. As you can see, it's going to be difficult to get a color identity for Snow as it has only appeared fully realized in one small set.  The few cards that appeared in Ice Age and Alliances aren't much help.  The two main things that Snow can do are:

Next, let's look at what we'd like Snow Instants and Snow Sorceries to do to evoke a feeling of coldness. These things are not necessarily absent from what Snow has done, but it's the things we like it to do more of. We'll try to get something from each color, if possible.

Let's put everything together and see if we can't make a new Snow Instant right now. It should have a mix of two or more color identities while keeping it cold at the same time. 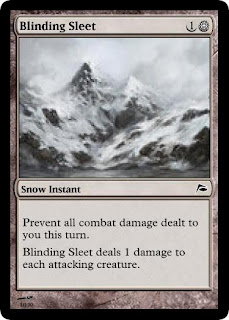 Blinding Sleet has what we need for a good Snow card. It could be printed as a Red/Green or Red/White card, but it feels right for Snow. This is what I mean.

Next time, I'll talk about Snow Creatures and how we can make them effective and flavorful.