Two new ideas, now with less text! They both change the way the card works, but done in different ways. Check it out.  If you missed the explanation of mount, check it out here. 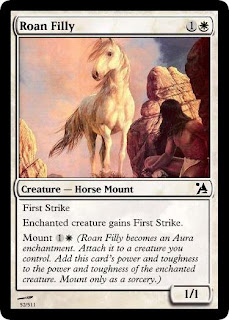 The second way is a bit more iffy.  It involves making a new card type - Mount.  Instead of putting the reminder text on each card, Mount would have its own rules as a card type.


The rules would be as follows:  Mount is a special creature type with associated rules. All creatures with the Mount type have a mount cost.  When you pay the mount cost of a Mount, attach it to target creature you control.  The creature it's attached to is considered mounted. Add the mount's power and toughness to the power and toughness of the mounted creature. It stops being a creature as long as its attached to another creature. Mount only as a sorcery.

Here's an example with the mount rules. 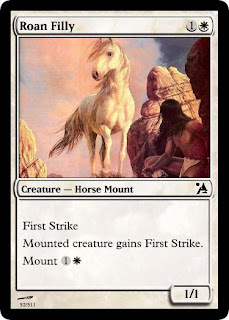 I feel like the rules are grokkable enough to work, and the card looks a lot more clean. Let me know what you think.

Edit:  Taking the comments into account, I believe this is the best form of Mount: 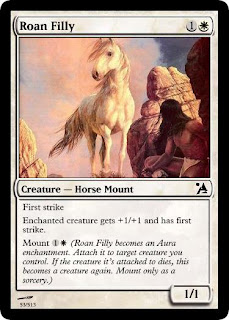 This form doesn't need a lot of extra rules baggage.  It's simpler, more concise, and self-explanatory.  It has the feel of a mix between equipment and licids, while keeping the flavor of riding a mount into battle.  I like it.
Posted by Unknown at 6:59:00 PM